“You’ll absolutely die when you hear what happened today at the café,” my then-girlfriend said, poking her head around the kitchen door to watch me struggle to cut the ribs off the entire bunch of dinosaur kale with a dull knife.

“Well, we were listening to that Judy Garland album you put on the store iPod,” she said, stepping into view in the door frame. Her jeans were dusted dark brown where she wiped her hands after each shot of espresso, and she smelled like work in that way I loved: salt and coffee and warm milk. “Philip Seymour Hoffman came in, ordered a couple iced lattes for him and Mimi, and was standing by the bar waiting for me to finish making them.” She came up beside me and gently took the knife from my hands, easily dispensing with the ribs and cutting the kale leaves into delicate ribbons. I leaned back against the cabinet and crossed my arms, watching her work. 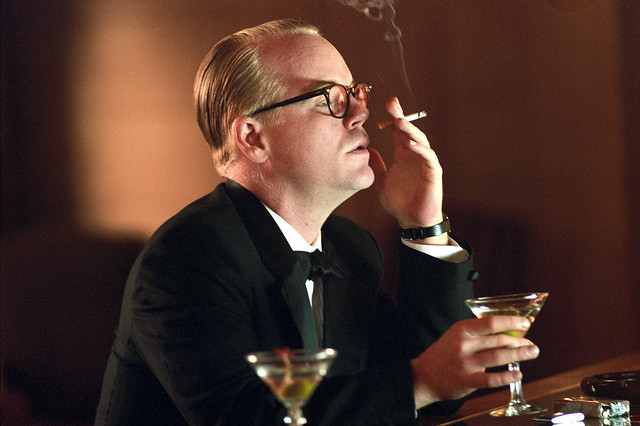 Phil Hoffman was a daily, sometimes twice-daily regular at the espresso bar my girlfriend and I both worked at; despite the entire staff’s giddy adoration of him, we had made some kind of silent pact with one another that we’d never betray our cool. No one ever let a whiff of fandom show—as though we weren’t busy filling the caffeine needs of the single greatest living American actor. Nope, no way, no big deal. This dude’s just a regular anybody in a grease-splattered T-shirt who clearly has an aversion to shaving.

“He sort of freaked out a little,” she continued, now crushing cloves of garlic under the flat side of the blade and slicing them into meticulous little pieces. “‘Oh my G-d, is this Judy Garland?,’ and went on about how she’s his favorite singer. I knew you’d go nuts.” She slid the garlic off the cutting board and into a skillet with the back of the knife, letting it sizzle in a shallow pool of olive oil.

It had only been three days since I’d heard the cast announcements for the Capote biopic, Philip Seymour Hoffman being slated to play the eponymous lead—who also happens to be my idol (in work, if not in life or style). It had become almost physically painful not to mention it to him, to tell him how much I trusted him to portray the artist who means more to me than anything else in this otherwise empty, meaningless world. So this was it, then—our mutual love of Frances Ethel Gumm was my way in. My ticket to transcending the thickly awkward $5 transaction that was heretofore the only impetus for our interactions.

I nodded and watched the kale turn bright green, wilting down to half-size.

For the next three shifts, I refused to let anyone play anything over the speakers but Judy Garland: “Live at Carnegie Hall,” “Her Greatest Film Songs,” “Judy In Love.” My coworkers wanted to kill me, but what if he came in again? What if I lost the moment to ABBA or Squeeze? I wasn’t prepared to take the chance.

Finally, it happened: Two iced lattes for the famous brilliant tortured actor and his very patient girlfriend, at the end of a line of drinks long enough for me to screw up the courage to squeak. My hands shook; I spilled at least a little bit of every liquid with which I came in contact.

He walked toward the espresso machine and leaned against the counter on his elbow, like a movie cowboy striding up to order a whiskey in a saloon. He looked everywhere except at me. I coughed a little.

“So,” I said without even a single shred of nonchalance, “I hear you like Judy Garland?”

Momentarily confused, he looked up at me as if to confirm that (a) I had spoken, and (b) my words were pointed in his general direction. His eyebrows dropped a little.

“Judy Garland,” he said with a vast intake of breath, “was a genius. A true genius. Listening to her sing—” He raised one arm in the air like a Roman statue, making a proclamation, and exhaled a deep sigh. “Just incredible.”

“I… I know—” I started, hoping to tell him how devoted I was to her. Dying to show him my tattoos: Judy on my left arm, Truman on my right. My spirit animals. Desperate to show him that we were made to know each other, he and I. “She’s my favorite sing—”

“No!” He brought his fist down on the counter; a spoon in its saucer rattled from the impact. “You don’t understand. Judy Garland was a fucking artist. Listening to her sing is a life event.”

A silent fog of embarrassment folded over the room. Philip Hoffman stood stock still, fist still pressed against the counter so hard it was turning white; he looked off at nothing, his eyes trained nowhere. I poured cold milk over espresso and ice in two plastic cups and put them on the counter: “Your… um, these are yours.”

He wrapped his thick hands around the cups and braced himself. Then he brought his eyes up to meet mine; they were red and wet. “Judy Garland,” he said once more. Then, breaking eye contact and shaking his head, he walked toward the door. “G-ddamn Judy.”