Fact: I love Liza Minnelli with a cracklingly fierce passion that seemingly comes from nowhere. I mean, sure, I’m passionate enough about her mother to have a stained-glass portrait of her permanently etched into the skin on my left triceps (as previously discussed), but an incredible life-force of a parent does not necessarily a fan-worthy performer offspring make. (See also: Billy Joel, subhead Alexa Ray Joel)

Fact: I first saw Liza Minnelli live in 2005, at a free concert in a half-shell located mere steps from the Coney Island boardwalk. I stood just outside the fenced-in lawn area, watching her swish around stage in a sequined Bob Mackie babydoll dress. “I’m really known for singing jazz,” she said, “but what I really like to sing are folk ballads. Or, to use the correct pronunciation, folk ba-LAHDS.”

Fact: Though I now realize it’s probably been part of her act for 20 years, I openly started sobbing upon hearing her sing a changed lyric in “Cabaret” during that first Coney Island show: “When I go, I’m not going like Elsie!” Of course it was met with huge raucous applause from the several dozens of old Russian ladies and aging gay men who were in the audience around me. I got goosebumps. I realized then if I hadn’t realized it already that I was not a normal twentysomething soft butch. 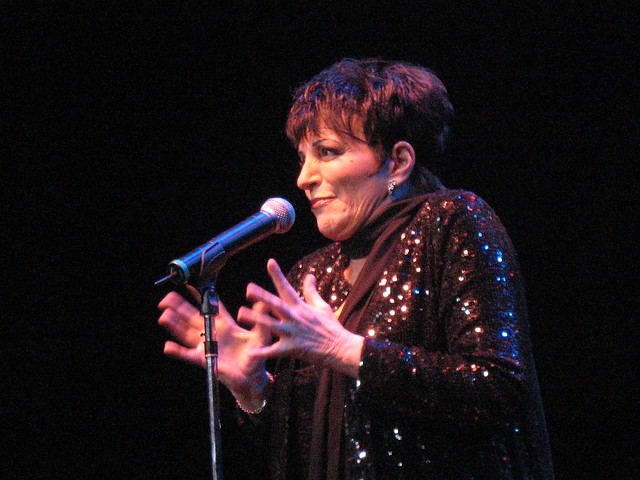 Fact: The following year, Liza (with a Z) was headed back to Coney Island, and I dragged four very game male friends of mine to the show. One of those men ended up becoming first my boyfriend, then my husband, but we didn’t know it yet during Liza’s set; it wasn’t until just after the show—when the goosebumps from that same “Cabaret” gimmick finally faded—that our status changed, in a swinging car on the Wonder Wheel, where we had our first kiss.

Fact: I told Liza Minnelli all of this on the phone in an interview for a magazine, and she said, “Well, gee whiz! Isn’t that just terrific!”

After a couple-year hiatus from the Coney shows, our Liza was back and slated to perform in the summer of 2008, when I was just finishing up a brief but meaningful professional attempt to make a go of myself as a magaziney type, working on the copy desk for a New York–local arts-entertainment-lifestyle weekly. (Yes, the very same one which undid my quasi-relationship with Amy Sedaris. Don’t worry, though; this story has a happier ending.)

As my last act in full-time editorial glory, I was gifted the opportunity to phone-interview the Divine Miss M about her return to the beach. She was an hour and 45 minutes late for the meeting, and she ended up answering most of my questions completely wrong, confusing this piddling free concert with another she was working on, which would be the much-lauded Broadway comeback “Liza’s at the Palace”. It made the resulting article completely nonsensical.

Here is a brief transcription of part of that interview which, as you can probably glean, was very difficult to translate into something even remotely usable for print. No matter: I got to have Liza Minnelli in my ear for all of 17 minutes, and I have the minitape to prove it.

Meister: You’ve actually played these shows at the shore for a few years now, and I know you spent some time growing up in New York. Did you go to Coney Island when you were a kid?
Liza Minnelli: Oh, yes!

M: And what do you get on your dog when you go to Nathan’s?
LM: The works!

M: Your schedule is really packed with international shows, you do a ton of traveling. How do you keep up with new music and listen on the road?
LM: iPod!

M: Oh, wow. Okay. Great. And who would you say is your favorite other musician working right now?
LM: Maroon Five!

Actually, the following video captures the essence of the experience I had pretty accurately, and I would gladly kill a man to have 17 more minutes on the phone with this woman. Liza, you’re a national treasure. Go on ahead, girl.